Listen to Me, Girls. I Am Your Father! Wiki
Register
Don't have an account?
Sign In
Advertisement 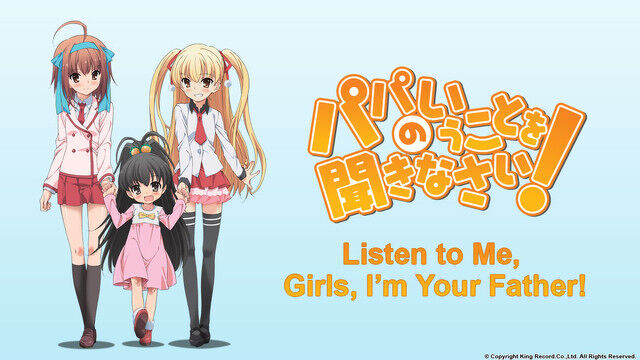 Welcome to the Listen to Me, Girls. I Am Your Father! Wiki[]

Listen to me, girls. I am your father! (パパのいうことを聞きなさい! Papa no Iu Koto o Kikinasai!?), also known as PapaKiki! (パパ聞き!?) for short, is a Japanese light novel series written by Tomohiro Matsu and illustrated by Yuka Nakajima. The first volume was published by Shueisha under their Super Dash Bunko imprint December 2009; as of September 2011, nine volumes have been released. A manga adaptation drawn by Yōhei Takemura started serialization in the September 2011 issue of Jump Square. An anime television adaptation started airing in January 2012.

Yuuta Segawa, a college student, suddenly becomes the guardian of his three nieces in place of his sister and her husband. The eldest niece, Sora, is a 14 year old middle school student with semi-long brownish hair decorated with a ribbon. The middle niece, Miu, is an elementary schoolgirl with blond pigtails. The youngest niece, Hina, is an angelic 3 year old attending daycare. This at-home romantic comedy illustrates the chaotic but heartwarming lives of these four characters in their tiny one-room apartment. SORA LIKES HER UNCLE HOWEVER THEY AINT BLOOD RELATED SOOOO...

Community content is available under CC-BY-SA unless otherwise noted.
Advertisement